By the time I was 13, I was 5’10” and 200 pounds. As a teenager in the 90’s in Hawaii, there was only one reliable source for plus-sized clothing: the Sears Women’s Department.

Which meant most of the clothes I had to choose from were tie-dyed, be-sequined, elastic waisted, or stirrup-ed. Clothes your fat grandmother would wear or some portly maiden aunt. Not clothes that a teenager could be caught dead in without committing social suicide.

As a bonus, not even Sears carried Women’s tall, which meant every pair of pants in there was at least 3 inches too short for my long, long legs.

For my freshman year, that is what I wore. I got up every morning, donned my high water elastic waisted mom jeans, and a sequined tie-died shirt and I went to school. Outcast is not a strong enough word to capture what I was. I was a pariah.

The alternative to that was to wear men’s clothing. Which I started doing my sophomore year.

Now, the thing about men’s clothing is it’s not built to house curves. And curves were the defining feature of my teenage body. I had curves for days. You would never have known it, though. Long-sleeved, high-necked XXL men’s shirts and 40-30 jeans kept my figure shrouded in secrecy. 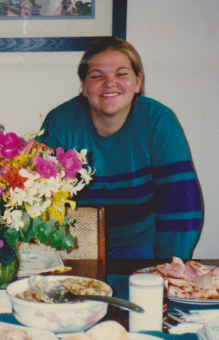 Or else my classmates were straight from the movie Clueless….

You get the picture.